Getting to know La Palma, The “Isla Bonita”

Welcome to La Palma , the ” Pretty Island “. Preparing your holidays? Considering a trip to La Palma and need information? Let us give you a quick overview.

On the island of La Palma , the most north-westerly of the Canary Islands , just over eighty thousand people inhabit an area of 708 sq km. The local islanders, known as palmeros , are said to be “friendly people” who are “never in a hurry”. We like to think this is true and try to act accordingly. In this day and age, when everything has to be done at breakneck speed, with no time to spare, we like to take things at a gentler pace, steadily, without rushing, and to grant ourselves at least some control over the clock.

On La Palma , the distances in kilometres do not accurately reflect the real distances. Here, everything is measured in time: the valid question is “how long does it take?” From the most easterly point, Santa Cruz de La Palma , to the most westerly, Tazacorte, it takes about 45 minutes by car, and from the northernmost part, Villa de Garafía, to the southernmost, Fuencaliente, approximately two and a half hours. That is, of course, provided you don’t get “lost” in one of the island’s many quaint corners, or too absorbed by the landscape – which is precisely what happens to most people on holiday here!

Once on La Palma , there are 6 things you mustn’t miss doing:

As a reward, once you’ve done everything, why not treat yourself to a local speciality and tomarte un barraquito. If you don’t know what it is, just ask and give it a try!

In addition, the following suggestions might also be included in your agenda: 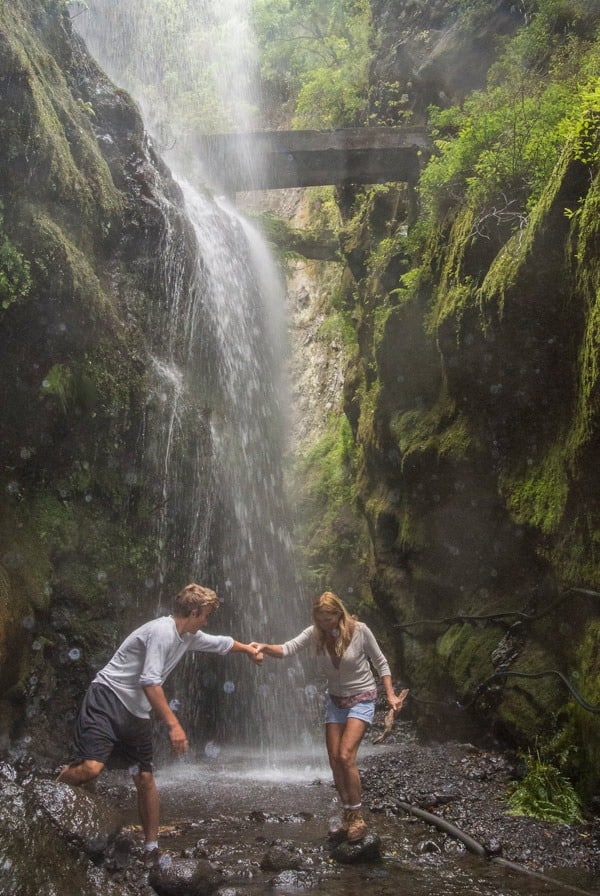 •  Watching the sunset from Playa Tazacorte

•  Eating fresh fish at Casa Goyo or having lunch at the Jardín de La Sal.

Temperatures on La Palma tend to be mild. The greenery on the hillsides testifies to this fact, and also means that there has to be rain occasionally. Depending on the season, we suggest you bring adequate clothing, that is, both light and warm garments that you can put on and take off depending on the time of day.

In 2002, the entire island of La Palma was declared a “World Biosphere Reserve” by UNESCO. It was the great variety of landscapes which, to a large extent, contributed to this, as every bend in the road reveals a new vista: barren lava flows which alternate with lush pine forests, deep ravines and high cliffs, small coves with their beaches of black sand, summits covered with laurel forest, and, somewhere or other, a herd of goats crossing the road.

In 2006, La Palma became the first place in the world to de declared a “Sustainable Tourist Destination”. It is our desire that all those who visit us feel at home, like “so many other palmeros “, that they get to know our traditions, take part in our fiestas (the Descent of the Virgin, the Indianos, the Crosses, Corpus Christi, etc), but above all, that they have memorable experiences during their holidays on the island, which in turn can help us preserve it for future generations.

Experience that “Isla Bonita” feeling, which has captivated so many of our visitors, and tell us about it on your return.

Come and feel La Palma for yourself!